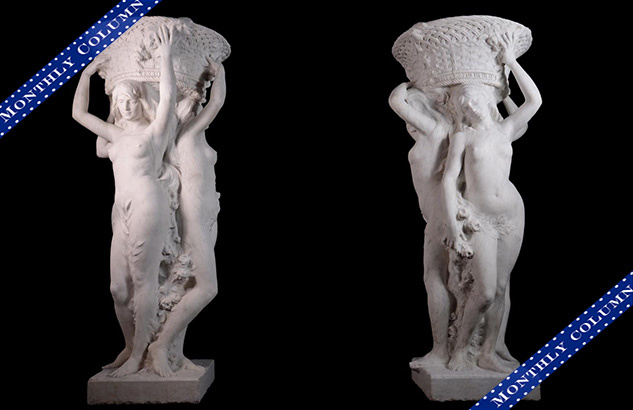 Comes from the garden of a chateau in the Paris area

Important garden sculptures in Carrara marble, these three Graces are placed back to back, naked, supporting a large planter imitating basketry on their heads. Each woman adopts a different posture showing the creativity and the will of the sculptor to create a real unique work of art. Designed as a pair, these two antique sculptures are therefore not identical.
With long loose hair and their intimacy simply hidden by a fine drape or by a leafy branch, these goddesses of charm and beauty adopt a slight sway as a cascade of flowers unfolds between the three women. 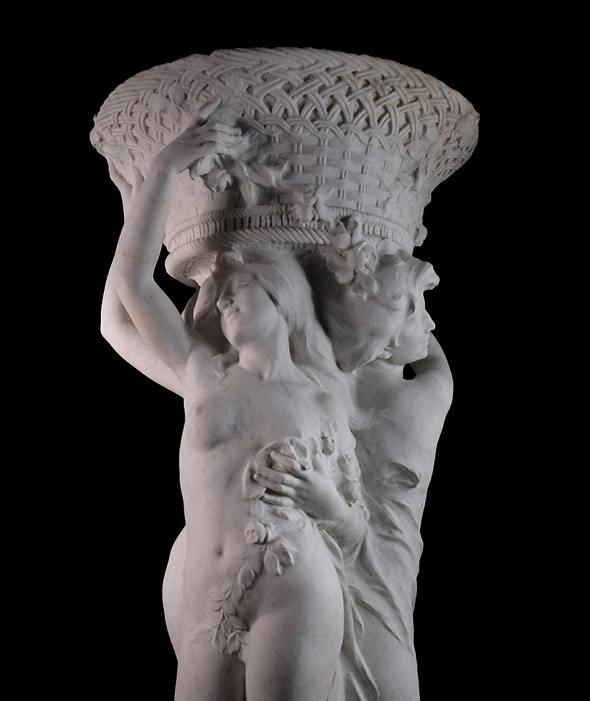 The planter, placed at the top, imitates a wicker basket with a complex weaving and meticulously represented from where flowers and plants escape.
These curvaceous sculptures prompts the viewer to observe it from different angles in order to admire its subtleties. Placed in the park or the garden of a beautiful estate, these sumptuous antique statues will display their grace and their qualities as statuary art. 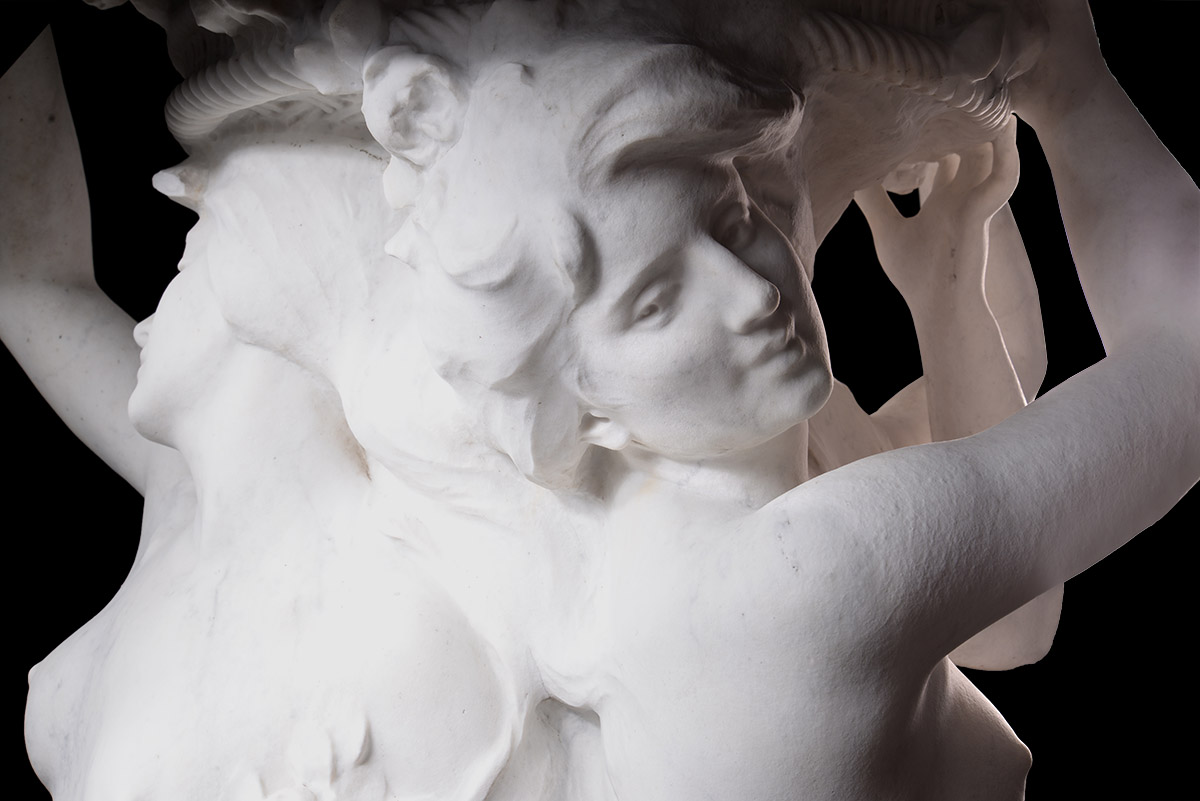 The two marble statues are signed and dated on the pedestal by the sculptor : “MONCEL 1909”

Alphonse-Emmanuel Moncel de Perrin is a french sculptor born in Paris, on the Montmartre hill, in 1866. Student of the great sculptor Antonin Mercié and Gabriel-Jules Thomas at the École des Beaux-Arts in Paris, he exhibited at the Salon of 1880, barely 14 years old, two works including the plaster statue of the poet Alain Chartier.
The newspaper Le Figaro tells this story a few years later in its columns: "The event having earned him a severe warning - because his parents had other views on him, - he fled again from the paternal house and exiled, this time, to the Parc Monceau, where, under the protection of his two godfathers, Alexandre Dumas son and General Février, who adored him, he knew how to make for himself in a few years a workshop that is today visited by all the Parisian elegance. "(In Le Figaro, Tuesday April 5, 1898). 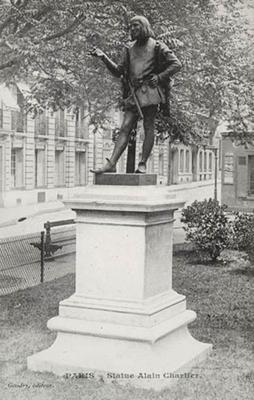 The marble statue of Alain Chartier, presented at the Salon of 1892, is now kept at the Museum of Fine Arts in Angers and the bronze, public monument situated rue de Tocqueville in Paris, has since disappeared, melted down during the Vichy regime in 1942. 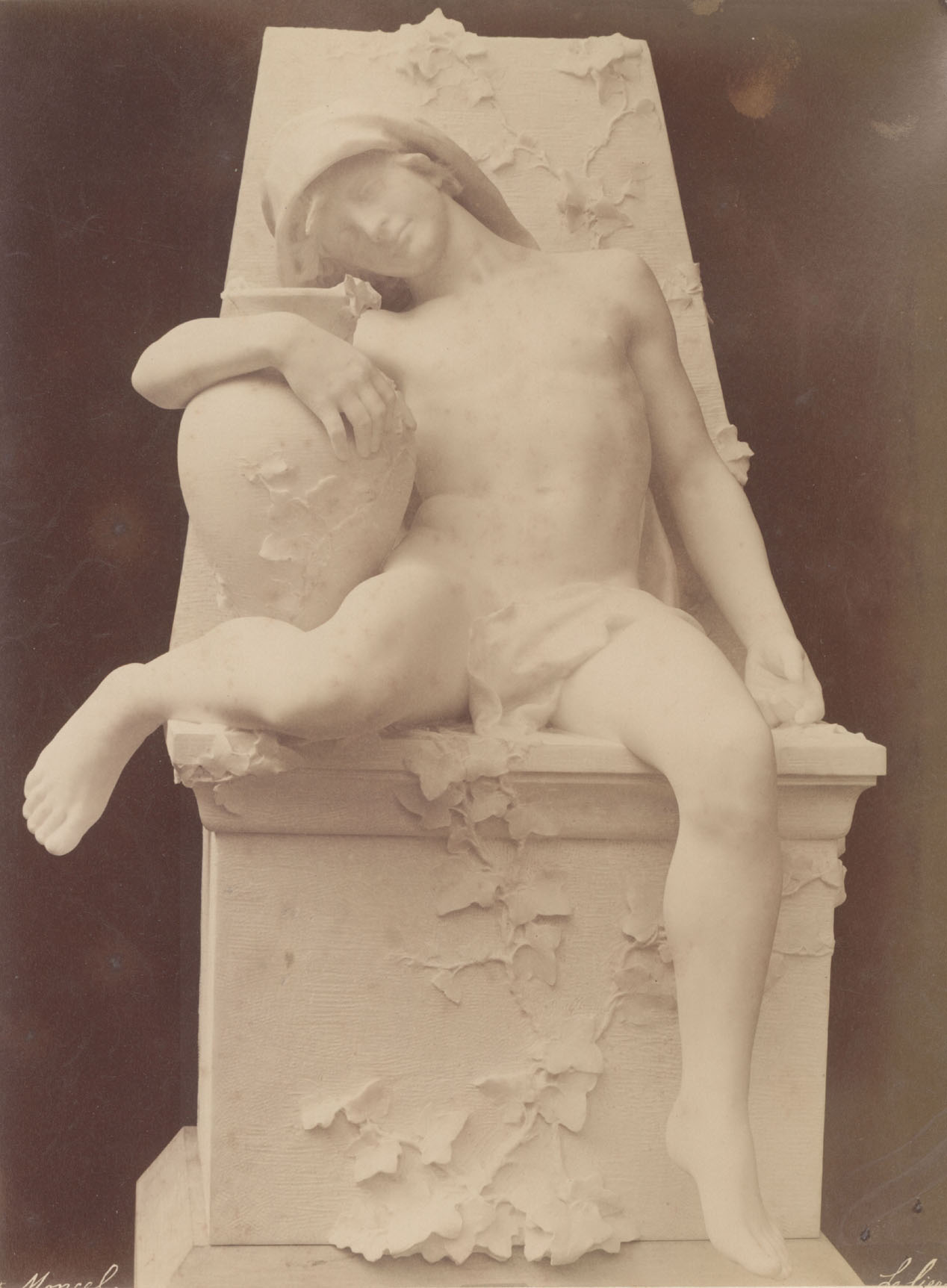 Alphonse-Emmanuel Moncel, "Ivy",
marble statue commissioned by the State for the Galliera Museum, exhibited at the 1895 Salon.

At the Salon of 1889, he presented the terracotta bust of General Février, his godfather, and was rewarded for this work with a Medal of Honor. Some orders from the French state then began to flow, in particular busts of personalities or public monuments.
Therefore he was ordered, for the Galliera Museum, a marble version of his statue entitled "Ivy" which was shown at the Salon of 1895. For this work, Alphonse Moncel was rewarded with a travel grant and a 2nd class medal.
In 1898, when he revealed to the Salon the sculpted group entitled "Towards love", the newspaper Le Figaro organized an Alphonse Moncel exhibition in its salon:
“The sculptor whose works are on display at the Salon du Figaro, which has become too small to contain the crowd of visitors.
Sculptor or poet? Despite his bristling mustache, a chaser of dreams and smiles, who sings, in its marble groups and its bronze statuettes with strangely precious oxidations, the beauties of youth and the graceful love of the spring of life. (...)
At twenty-five, won with his "Ivy", the model of which is at the Salon du Figaro, the Grand Prix of the Salon.
Has already done fifty works - including some masterpieces - which would sum up with honor the entire life of an artist, and yet is barely thirty years old.
Particular sign: Have a mania, in his spare time, for stopping the carried horses and to save people, so that he won almost as many medals in the street as in the Salon, which is not little to say ". (in Le Figaro, Tuesday April 5, 1898). 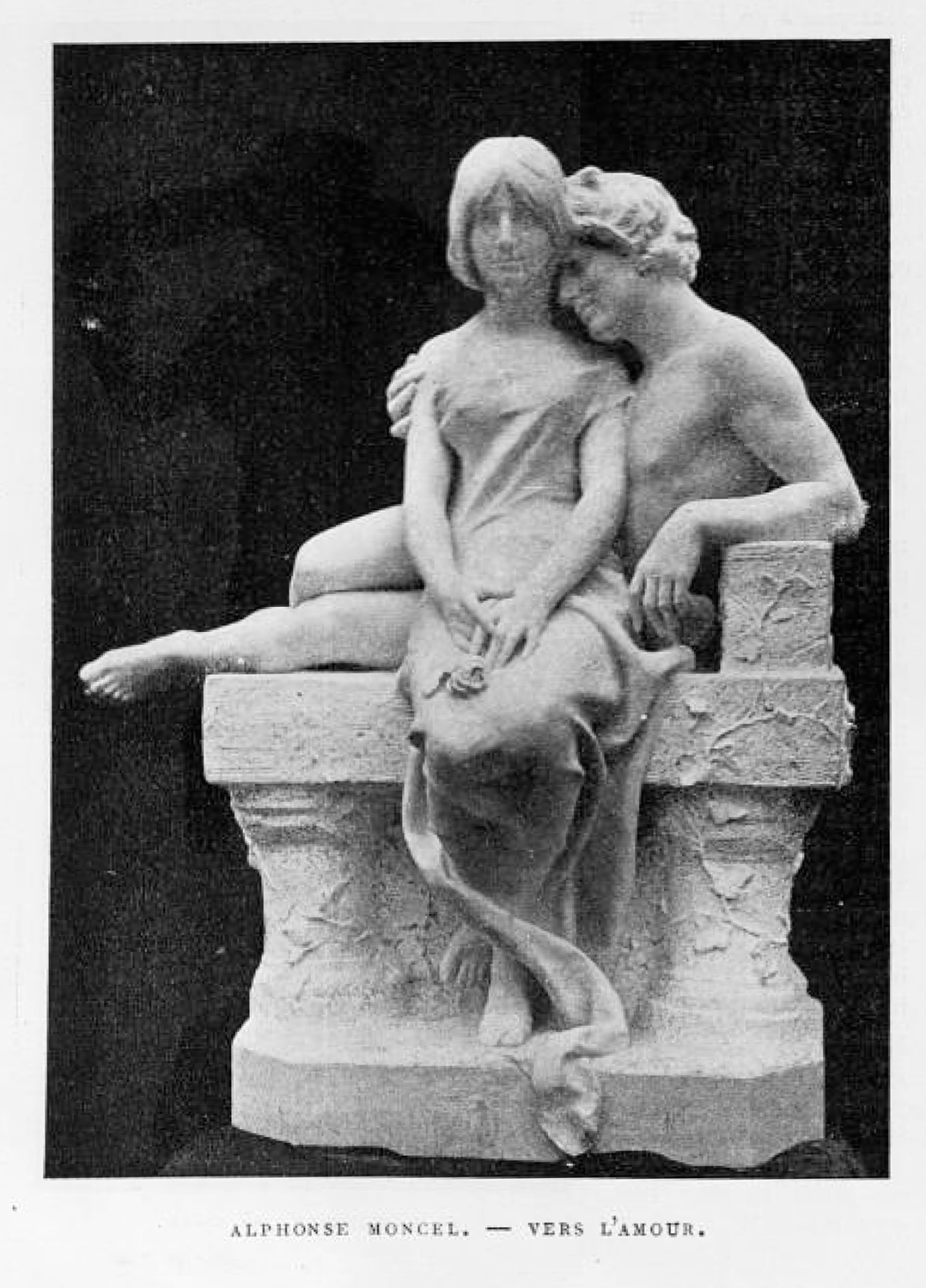 Alphonse-Emmanuel Moncel, "Towards love",
marble group exhibited at the 1898 Salon .

While participating in the carved decor of the Petit Palais built for the 1900 Universal Exhibition, by creating two high reliefs (Venus on the Champs-Élysées side and Junon on the Seine side), he contributed to the Hanoi Exhibition in 1902, which earned him the Legion of Honor at the class of Chevalier.

In July 1903, the columns of Figaro report:
"His Imperial Majesty Prince Louis Napoléon, who has come to Paris several times since the beginning of the holiday he spends with his aunt Princess Mathilde, went to the workshop of sculptor Alphonse Moncel.
The eminent artist, who had already made a medal with the portrait of the prince, has started a bust of him which he hopes to be able to finish for the next Salon. " This bust will be exhibited at the 1906 Salon.

In 1907, he was ordered by the City of Paris and the State, the realization of a monumental marble low-relief in memory of Alfred de Musset where he represents the poet contemplating his main works The Night of May, The German Rhine, Namouna…. Entitled "The Poet's Dream", the work was installed in the garden of the Canada Place in 1910, where it still remains.


In the Léon Blum square in Boulogne-Billancourt (Paris area) is still visible a large group carved in marble representing two young girls with a conch shell which can easily be compared with our Three Graces and which was substantially realized at the same time. 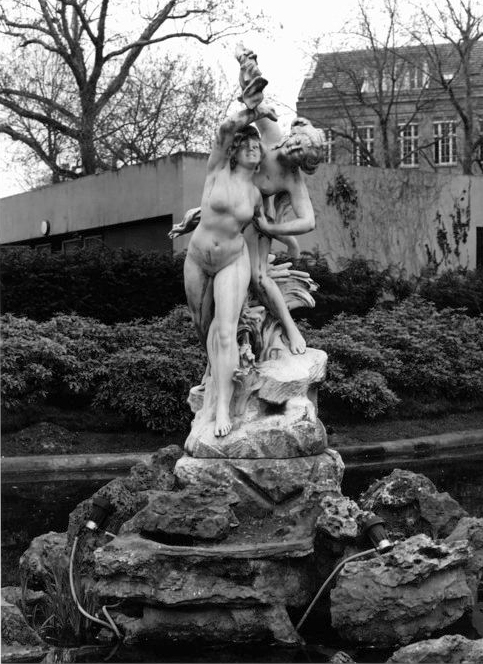 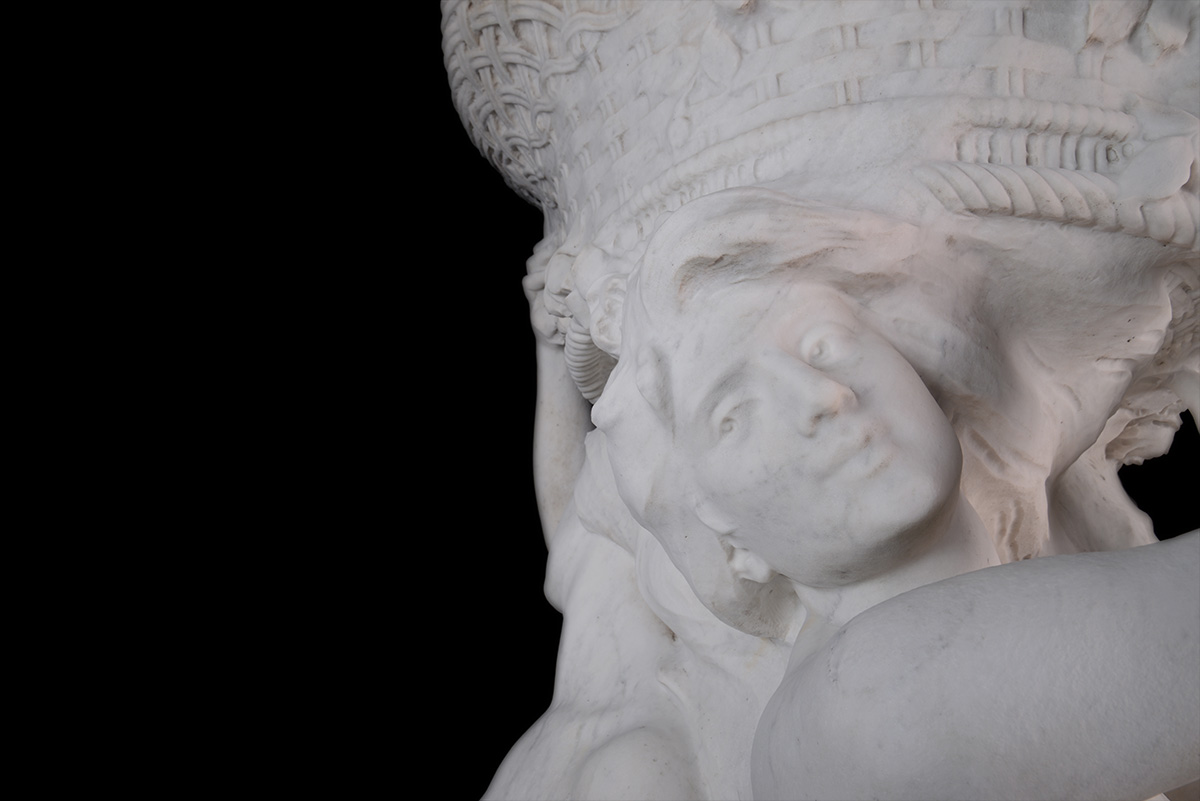 Alphonse Moncel will carry on his prolific career until an advanced age, continuing to exhibit at each Salon until the 1920s. Despite the events, the 1910s were fertile for the sculptor since he composed some major sculptures such as the bronze statue of General Dumas, commissioned by Alexandre Dumas son to adorn the so-called Place of the “three Dumas”, today Place Malesherbes (the statue was melted by the Vichy France regime in 1942).

Following the Great War, and for reasons that remain to be elucidated, the sculptor was adopted in 1918 by Guillaume de Perrin and then changed his patronymic name to Comte de Perrin de Cabrilles Labrassaguier, becoming Alphonse-Emmanuel Moncel de Perrin for the artistic community.

With a great career to his credit, Alphonse Moncel produced the pair of Three Graces sculptures that we present here.
Dating from 1909, they are made following his monumental work dedicated to Alfred de Musset, a masterpiece that still adorns the streets of Paris today.
It is most likely a special order from the owner of the chateau in the Paris region where these sculptures were rediscovered. 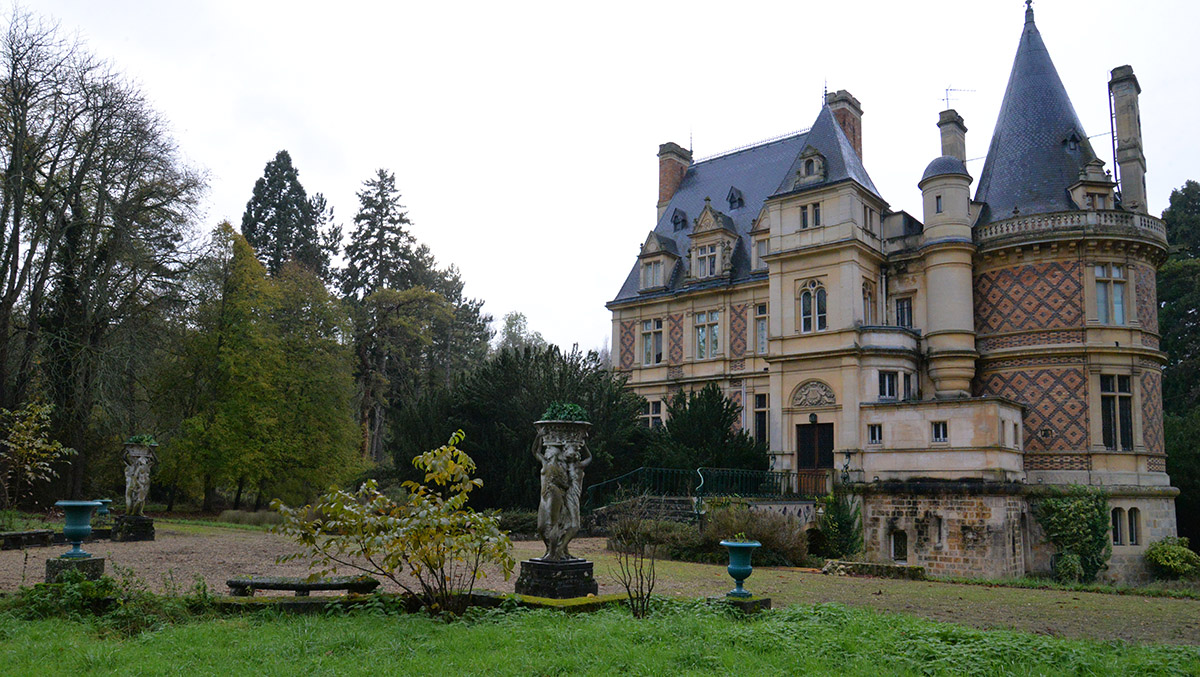