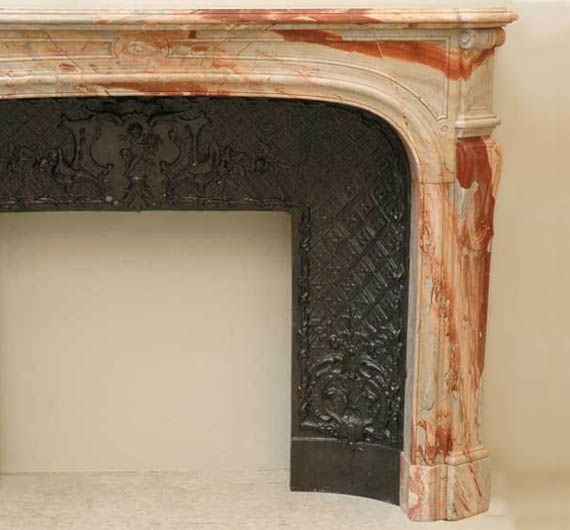 Sarrancolin marble quarries are located in the Neste d'Aure valley in the South of France. Three quarries are still active today, exploiting the same geological vein.
The Sarrancolin marble is a multicolored breccia, quite homogeneous, composed of crystalline gray limestone in a red cement and pink details. The result is a flesh-colored tone, due the presence of many fossils. All the Sarrancolin marbles have flamed red patterns but the Sarrancolin Fantastico is more in a pink-beige tone.
It is a mixture of fragments of different colors : cream, yellow, pink, gray and green. Red and white calcite veining compose the major part of this marble's surface. It is also called Sarrancolin Opera Fantastico when it is extracted from the Ilhet quarry in the town of Sarrancolin.

If the quarries of this valley are exploited since antiquity, is thanks to the Sun King - Louis XIV - that they became famous throughout europe. They received the title "Royal Quarries" in 1692, and several blocks of Sarrancolin were ordered for the decorations of Versailles and Trianon from April 1686 to September 1689.
This marble was used to realize the fireplace adorning Queen Mary Lecszinska's Room at the Versailles Palace. Under Louis XV it was also in this marble that the impressive Hercules Salon fireplace was made. This precious marble with such peculiar colors, was used in all times for floors, wall coverings, fireplaces and furnitures.

Here are some exemples of wall covering : Fontainebleau castle, Monte Carlo Casino, the bases of the Invalides tombs of Turenne and Vauban.
You can also gaze at the beautiful Sarrancolin Framboise (raspberry) marble fireplace in on of the Louvre Museum period room : the Grand Salon of the Abondant castle. 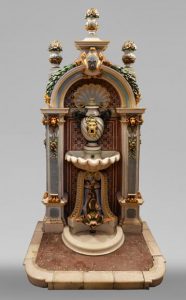