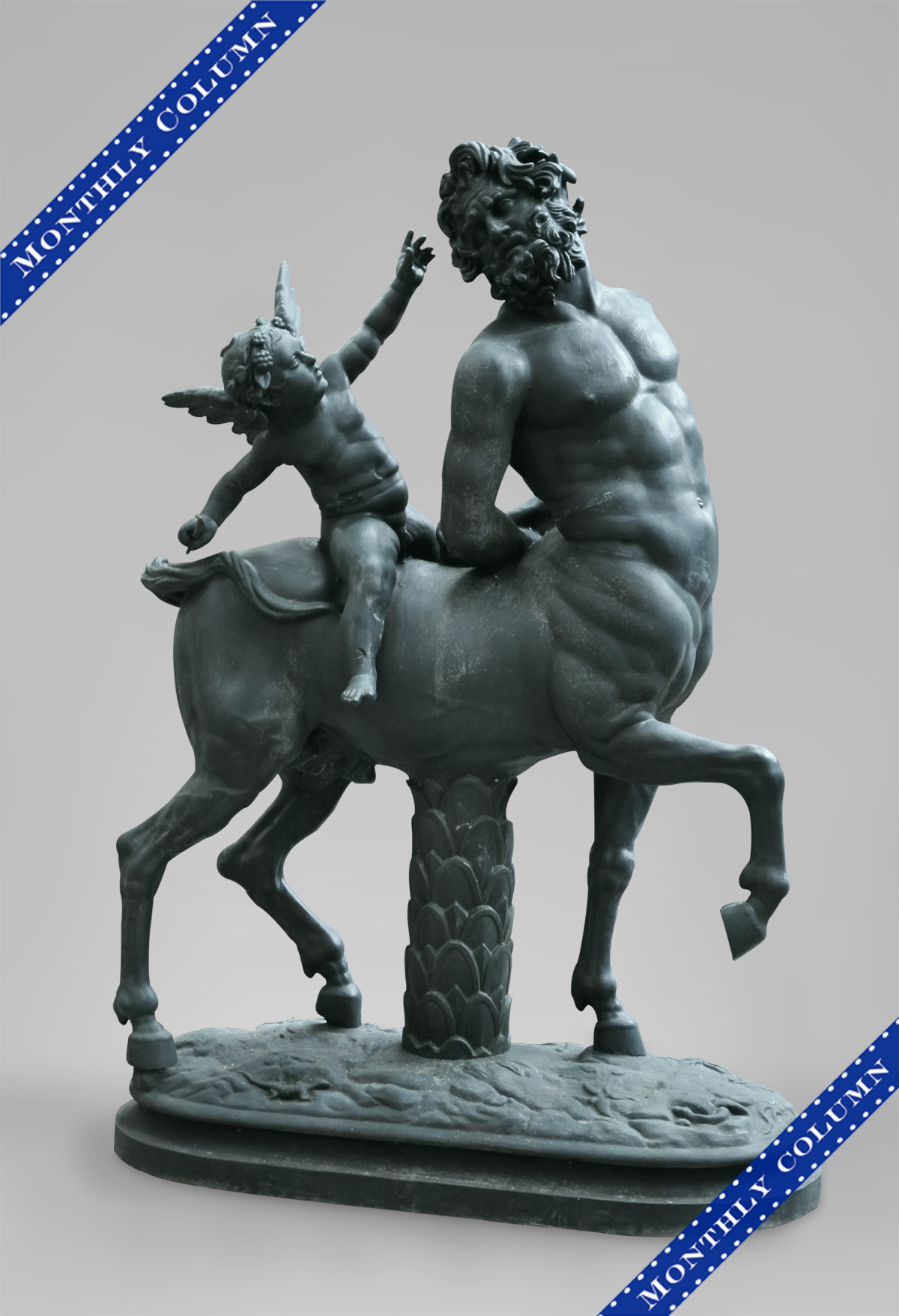 Cast Iron statue, France, Second half of the 19th century

This statue, "Old Centaur teased by Eros", represents a centaur with its arm crossed, and his back twisted towards the back, exhibiting his prominent muscles. The movement of the creature's head shows the effort he makes to see who is sitting on his rump. Half-man half-horse, the centaur seems furious, while little Cupid distracts himself by pulling the centaur's hair on his head and back. Mischievous, the God of Love has tied the centaur's hands in his back, that the creature cannot struggle. 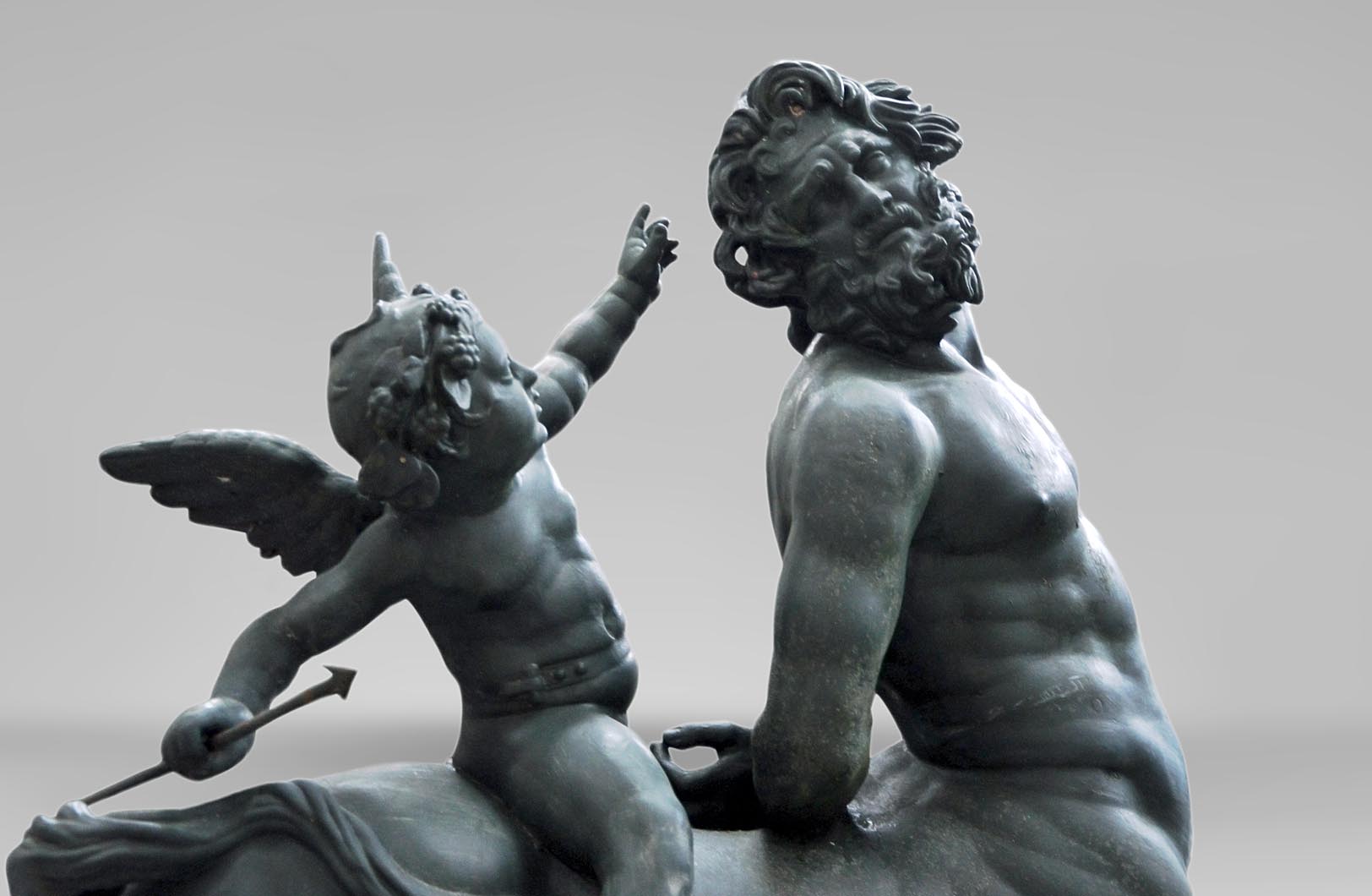 The reproduction of an antique artwork :

The "Old Centaur teased by Eros" would have been carved in marble at the imperial period by artists coming from Aphrodisias, an antique city of Asia Minor located in actual Turkey. The statue was rediscovered during the 17th century and entered the collection of Scipione Borghese, a passionate collector, whose antiquities were gathered mostly between 1607 and 1612 to adorn the Villa Pinciana. In 1807, Camille Borghese sold several hundreds of antique artworks - from which this statue belonged - to Napoleon, his brother-in-law, who wanted to show that his reign was a continuity of the Roman Empire. Thus is created the "Musée Napoléon" ("Napoleon Museum") where were exhibited this collection of exceptional pieces, including, besides this Centaur, major artworks as "The Borghese Gladiator", "The Sleeping Hermaphroditus", or even "The Borghese Vase".
Today, The "Old Centaur Teased by Eros", is kept at the Louvre Museum, into the splendid Salle des Caryatides. 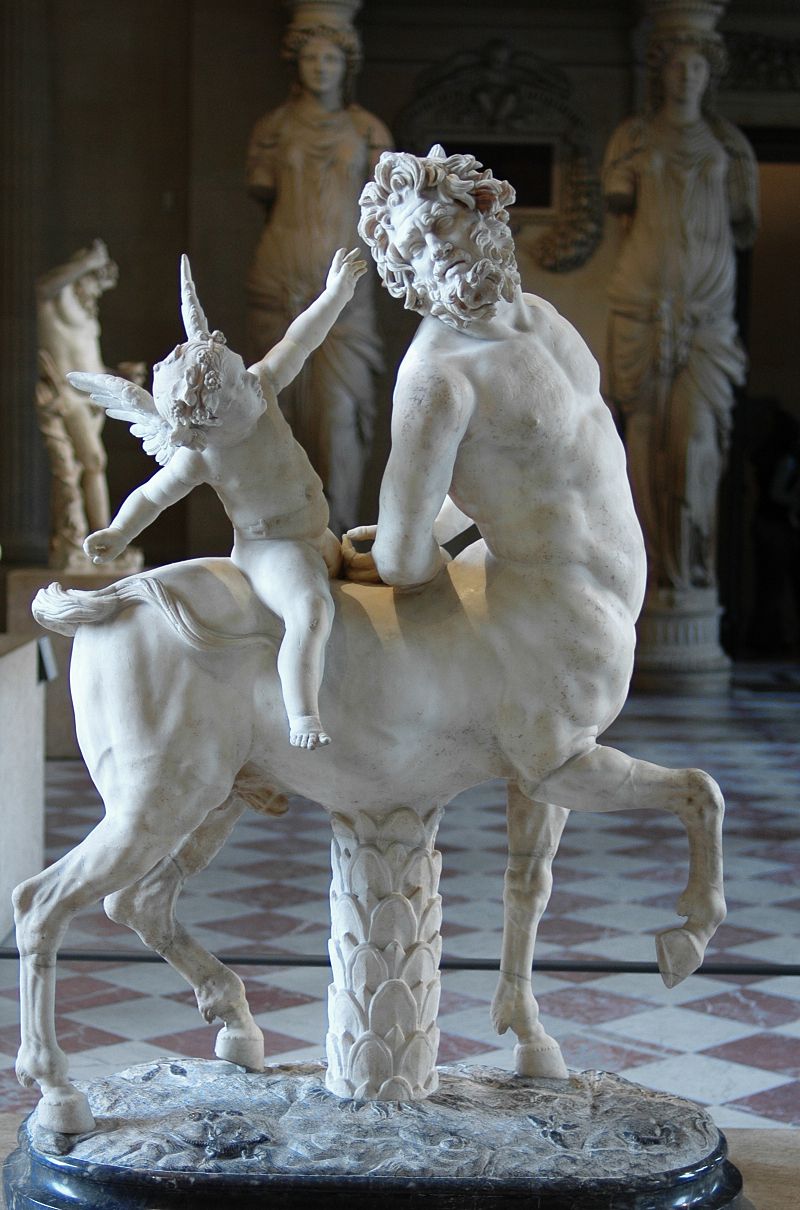 A cast iron statue at the Industrial Revolution era :

Cast iron was a new material, born with the Industrial Revolution ; if it was used to make this statue, the latter yet continued on a tradition through the reproduction of an antique artwork from the I-IInd centuries. The tension between past and innovation reveals here all the Eclecticism of the 19th century.
The first Industrial Revolution began in England in the second half of the 18th century to slowly spread into Europe and North America from the 19th century to the first World War. During this time, progresses were made into urbanism, the metal became a fundamental material, massively used, and especially for constructions reserved for engineers like bridges, railway stations or even for factories buildings.

Cast iron, raw product of the blast furnace, comes out liquid of the crucible ; it can easily be poured into molds. That is why, after 1820, this material was used to make decorative elements, garden ornaments, fountains or statues. Cast iron is cheaper than bronze : this technic allowed a large diffusion of tough, high quality sculptures, often with monumental dimensions.

The success of the bronze editions in the middle of the 19th century provoked a profound shift for both sculptors and metalworkers. Achille Collas - the creator of the process of "réduction mécanique" which allows to enlarge or reduce the dimensions of an original artwork in order to reproduce it in metal - is often compared to Gutenberg. The taste for the metal reproduction of an original statue is confirmed by the advent of cast iron, a cheaper and simpler material.
Away from the Salons, this production responded to the bourgeois 'new incline for beautiful objects : it spreads into theaters, open galleries, rich flats, public places or enlighted art lovers' gardens, like was "Old Centaur teased by Eros" which testifies of a deep knowledge of antique artworks. 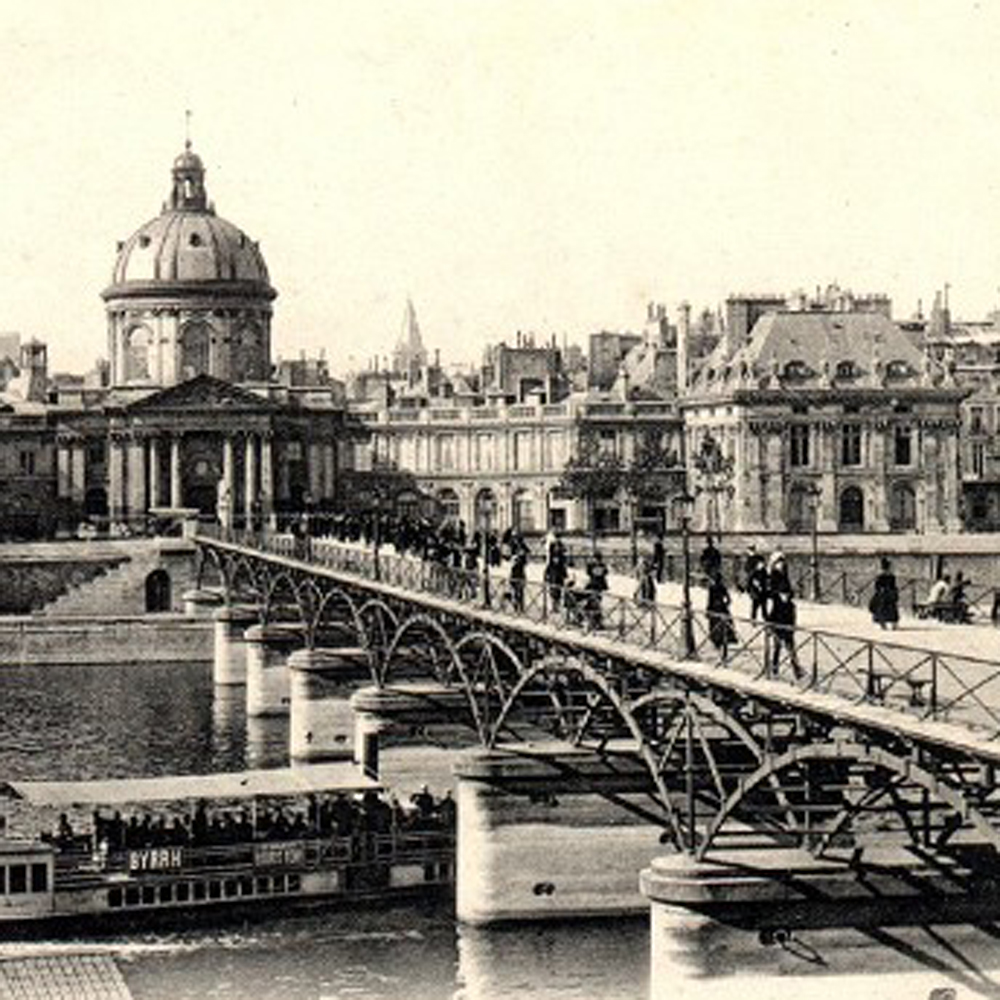 The Ponts des Arts
built between 1801 and 1804
with nine cast iron arches. 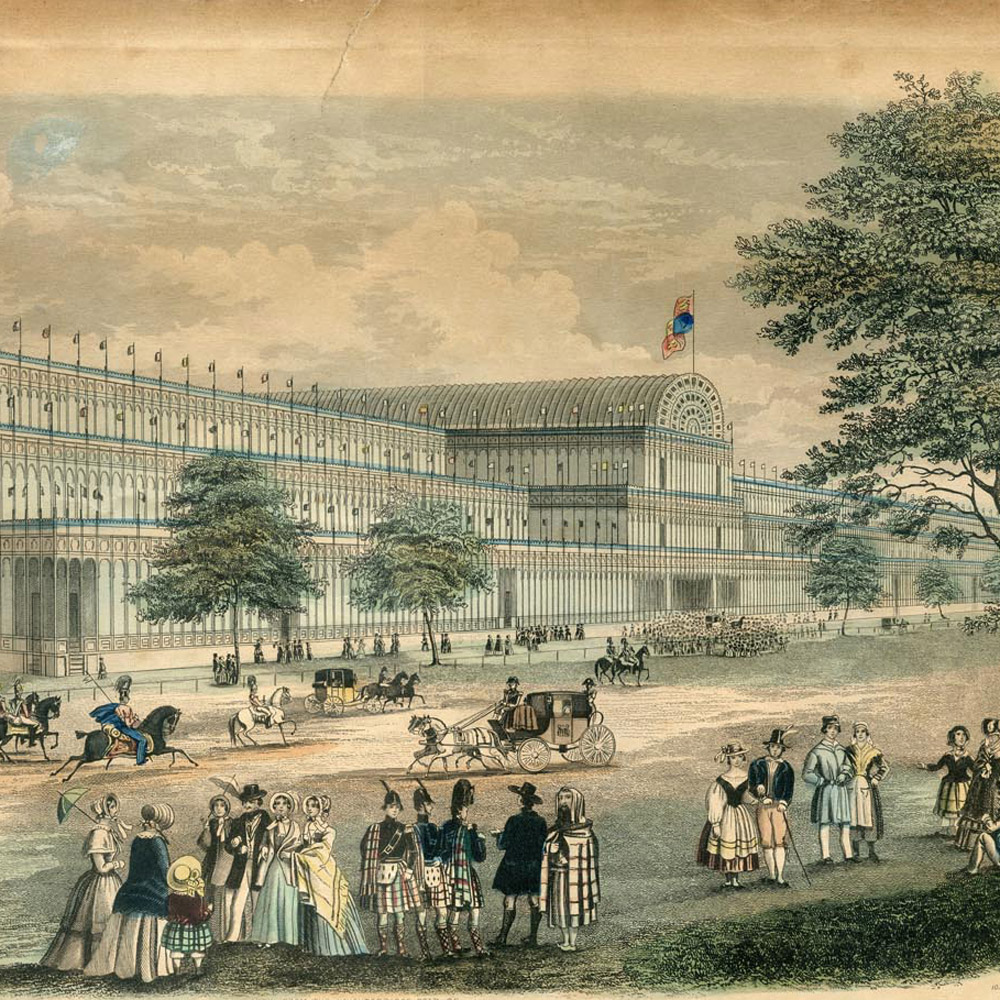 Art foundries in the 19th century :

The cast iron artwork industries grew under the Second Empire and the IIIrd Republic to concentrate its activity in a couple of foundries, as the Val d'Osne foundry, the most important of France, the Durenne foundry, which largely contributed to the renown of French art foundries abroad, or even the Ferry-Capitain or Tusey industries.

Frequently, antique models - from the Louvre or the Palace of Versailles - or even artworks of contemporary sculptors like Mathurin Moreau, were reproduced. 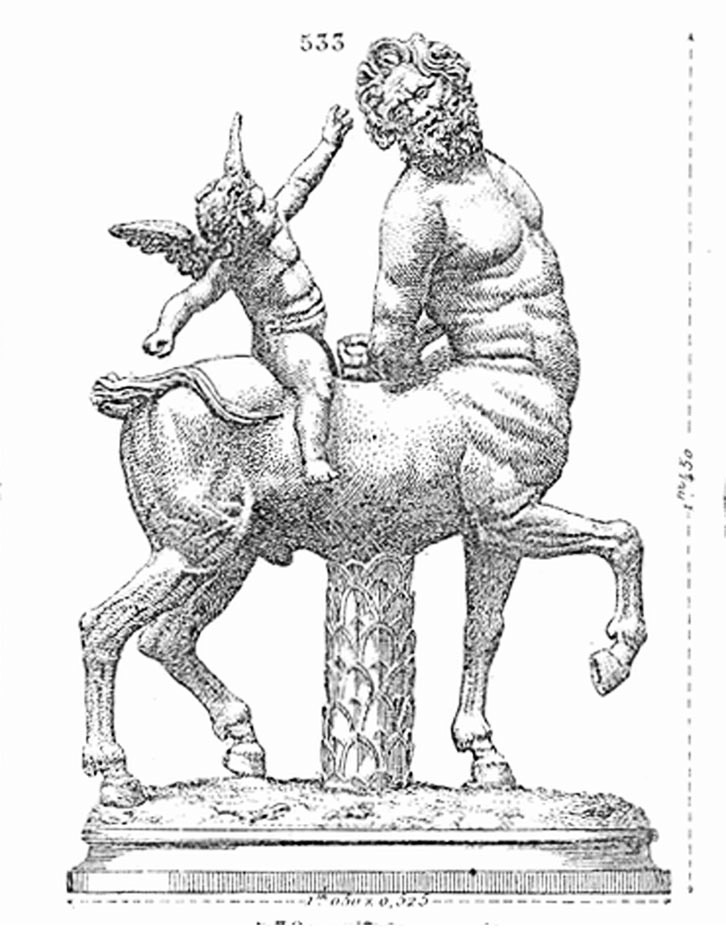 To disseminate their production, foundries used different means. The National Exhibition of Industrial Products and then the World's Fairs exhibitions, gave a great opportunity to exhibit artworks and receive awards which really mattered into sales pitch. In 1851, the jury wrote in his report: "M. André, from the Val d'Osne […] exhibited a fountain of an admirable construction and molding. His alligator, his chimney, his frame of bed, presented a casting that was so perfect that we could hardly believe those objects had not received any retouching, but were just as out of the mold". He received a silver medal. Again, the Universal Exhibition of 1867 consecrated the Durenne foundry at an international scale.
The albums were the other important channel of the foundries. Those books, more and more expensive and thick, were given or sold by the foundry manager to his clients. Inside were engraved all informations regarding their collection. "Old Centaur teased by Cupid" appears so in a Val d'Osne catalog (n° 533). 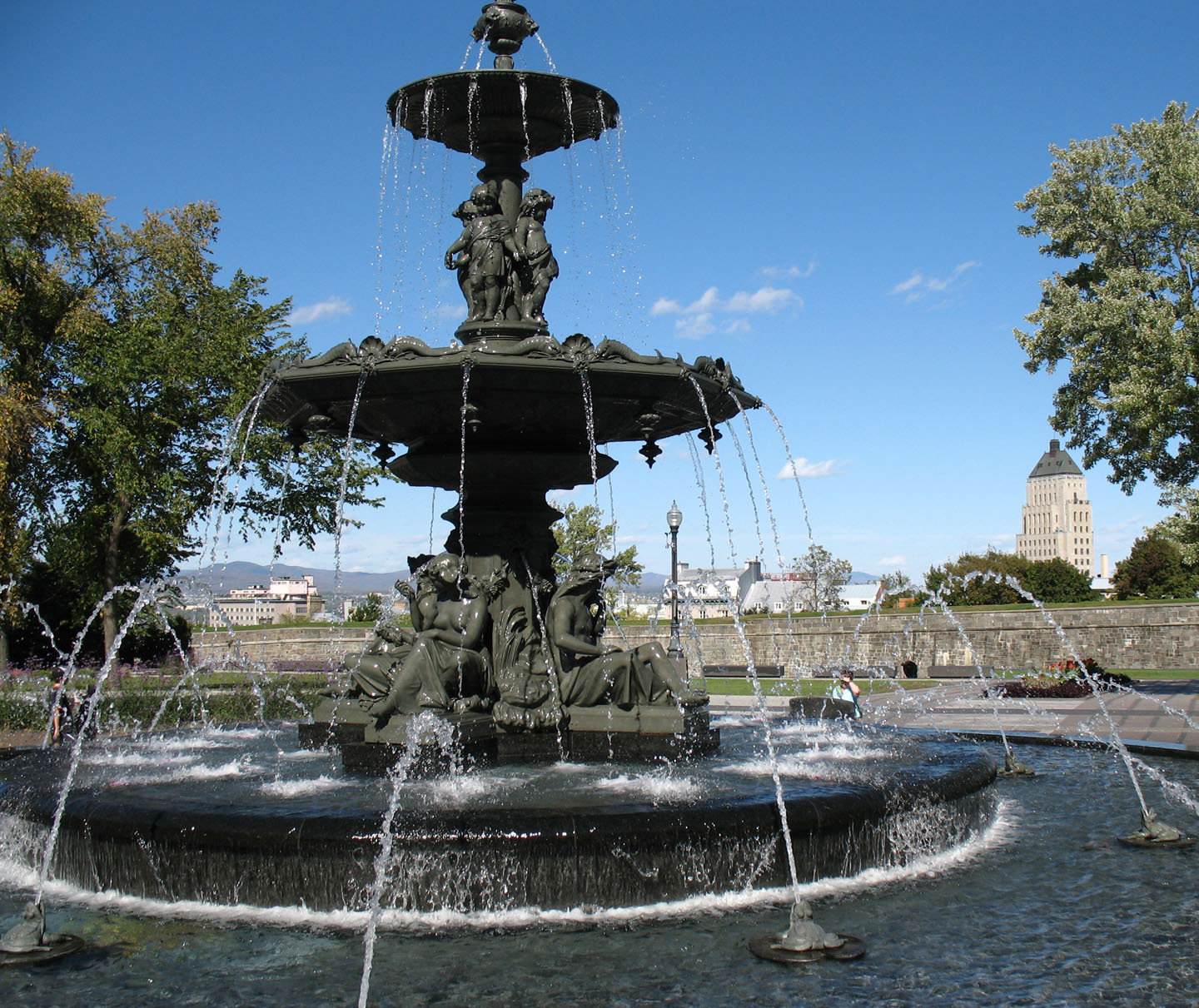 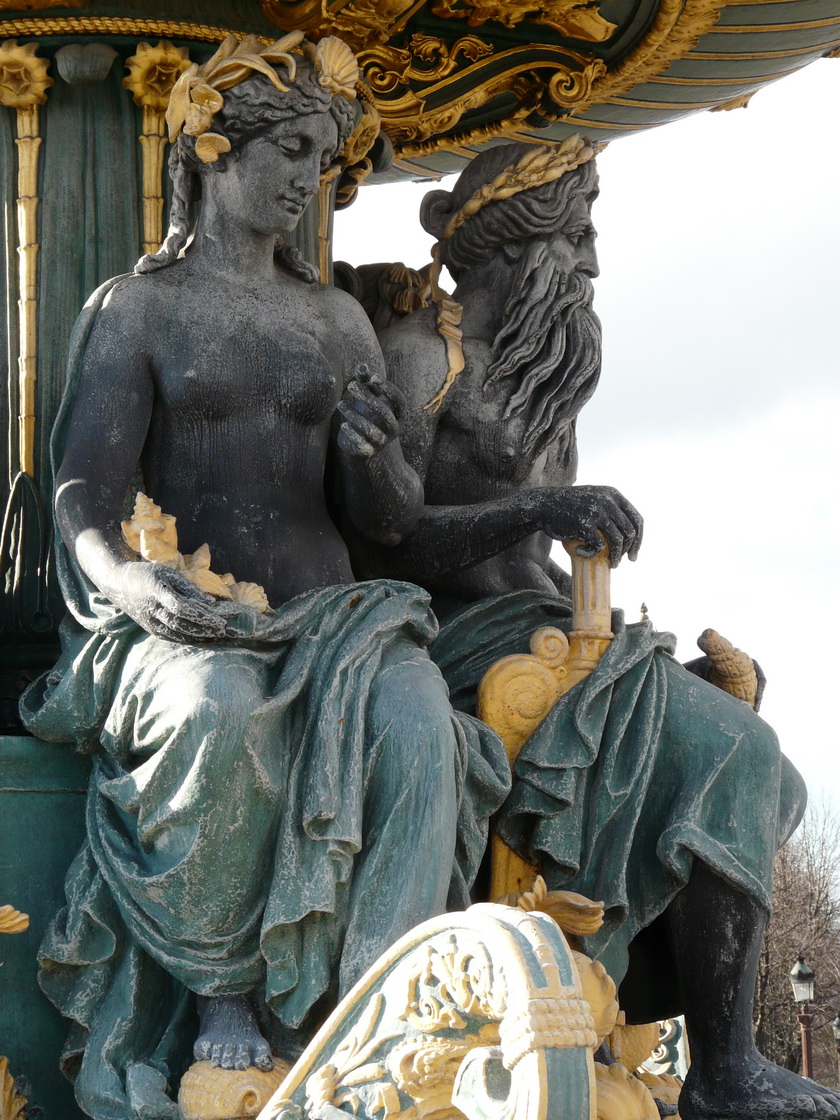