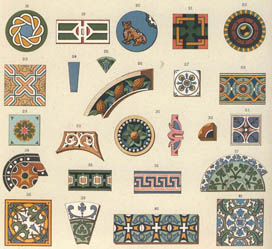 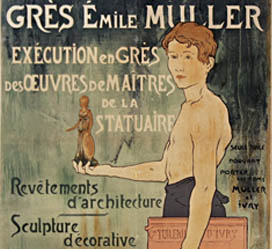 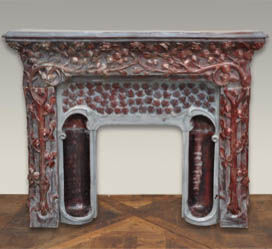 The architect Émile Müller (1823 – 1889) founded in 1854, the “Grande Tuilerie” a factory which produced architectural decoration and artistic reproductions. His prestigious works, such as these, went on to achieve great recognition, both in France and abroad. In 1889, his son, Louis took on running the “Grande Tuilerie”, under the name “Émile Müller and company”. The society became “the largest factory of ceramic products for buildings, industries and works of art in the world”.

The “Grande Tuilerie” won several awards at the Universal Exhibitions. They worked with famous artists such as Henri de Toulouse-Lautrec or Hector Guimard.
The “Grande Tuilerie” quickly specialised in architectural ceramics, which developed over fifty years, from 1870 to 1914. They made the earthenware polychrome décor of the Meunier chocolate factories in Noisiel.

Because of the Economical crisis and the Two World Wars, the factory gradually went bankrupt. In 1968, it was sold to the Lafarge group and the factories were then demolished.
A piece of art keeps the memories of this impressive factories : The Frieze of Work, a high relief stoneware made by sculptor Guillot and cut in the furnaces of the Grande Tuilerie. It was transferred from Ivry to Moulin de Breuillet park. It was recovered by Emile Muller from the left pillar of the monumental door made for the exhibition of 1900, which he placed on a pedestal in his factory in Ivry.