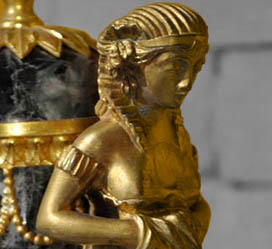 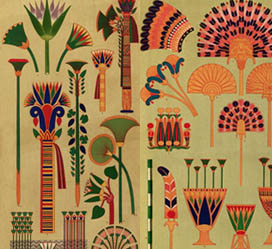 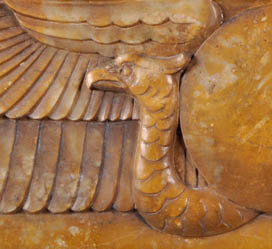 Egyptomania is a cyclical phenomenon in Western art, this taste appears regularly in history : during Roman times, in Renaissance cabinet of curiosity, and even in the 50's movies.

With the French campaign in Egypt of Napoleon in the early 19th century, Egyptomania completely invaded the decorative arts. Sometimes it is considered as part of the Empire Style, the Egyptomanian style is composed of palm leaves, sphinxes and even winged sun disk. This symbols were on Egyptian works of art, reently added to the Louvre collection by Champollion.
During the 19th century, Egyptomania affected all forms of creation, here are some exemples : Aida (an opera created for the Suez Canal), the Academic art painters like Jean-Léon Gérôme, furnitures, fireplaces and all the decorative arts in general.

In 1922, in the middle of the Art Deco style domination, the discovery of the tomb of Tutankhamun made Egyptomania fashionable again. Its motifs and paterns invaded the world of fashion and advertising. Later on, the 50's cinema revisited Egyptomania's codes. This fascination continues to this day, for example with the Louvre pyramid in 1989, or the one at the Luxor Hotel in Las Vegas, in 1993.